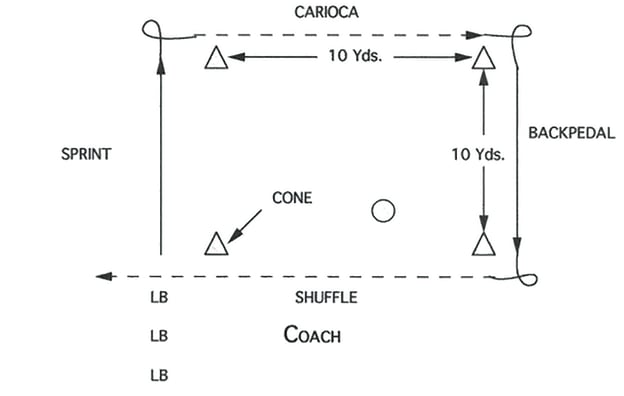 The Linebacker 4 Corner Drill is a great way to train your LB’s on multiple movements and techniques.

The first phase of the 4 Corner Drill is the straight-ahead sprint. Your linebacker starts by freeze-stepping and then sprinting 10 yards. Once reaching the 10-yard cone, the player should pivot around off his inside foot which will put him facing the coach.

The second phase of the 4 Corner Drill is Carioca. Once your linebacker comes out of his pivot he will then step with one foot and crossover with the other, then step again and crossover behind. Keep shoulder square to the line of scrimmage while maintaining a “Z” in the knees and keep eyes focused on the coach. Players should go as fast as possible while remembering to stay low. Once reaching the second cone, come out of the carioca shuffle by pivoting and going into a backpedal.

The third phase of this drill is the backpedal, which requires your linebacker to begin backward movement with a good body lean and the chin in line with the knee. Make sure when backpedaling that the player’s weight is distributed over the knees and in line with the hips.

The fourth and final phase of the 4 Corner Drill is the shuffle. Once reaching the 3rd cone, pivot and keep shoulders square to the L.O.S. Shuffle for 10 yards to the next cone by keeping feet shoulder-width apart, never allowing the feet to come together or crossover. Keep the “Z” in the knees and shoulder square to the L.O.S. while always maintaining eye contact with the coach. When reaching the fourth and final cone, turn and finish the drill with a hard 5-yard sprint.